For a Real-Time Strategy player, there are few things more satisfying than the comprehensive act of causing immense digital destruction in a short amount of time.  Traditionally this is accomplished utilizing super weapons like nuclear missiles or orbital bombardment, but starting in the mid-90s game developers provided players with a new way to devastate their opponents on the battlefield.  Epic units, as they would come to be called, were powerful creatures or war machines that were incredibly durable, possessed immense destructive power, and were typically the pinnacle of the player’s economic and technological development.  Their presentation and themes took different turns over the years, but the trend is unmistakable.

As with Westwood Studio’s iconic Mammoth Tank, the development of epic units had a slow and indeterminate start.  In Blizzard’s landmark title Warcraft: Orcs & Humans, each race is able to use its highest tier caster to summon a powerful, temporary unit; the Water Elemental for the humans, and the Daemon for the orcs.  While both units were not in the strictest sense epic, they were notable for requiring the highest possible concentration of resources to produce, and possessed combat abilities far beyond anything else the rest of the army rosters could muster.  Despite this being something of a hallmark for things to come, Blizzard would never fully pickup on this trend.

That Westwood Studios would be the next developer to produce an example of a proto-epic unit is quite ironic given the rivalry it shared with Blizzard.  Red Alert: The Aftermath, the second expansion to the popular Command & Conquer: Red Alert title, featured a single mission with three AI controlled “super tanks”.  Although un-buildable and uncontrollable for the player, these tanks had all the features of an epic unit, which the mission proceeded to showcase as the tanks shrugged off tesla coils and nuclear warheads while laying waste to an extensive Soviet Base.  Editing the unit files would allow modders to gain access to the super tanks, but as yet a true epic unit would remain out of reach of players for a few more months.

In March of 1998, Cavedog Entertainment would release the first expansion to its seminal product, Total Annihilation.  The Core Contingency, as the pack was titled, introduced a host of new units to the base game, including the mighty and powerful Krogoth Experimental K-bot (k-bots being essentially single-purpose mechs).  The Krogoth was a surprise for many Total Annihilation players as it had no direct counter or equivalent in the opposing faction.  Additionally, its only weakness was its inability to cross water; in all other respects the Krogoth annihilated any form of opposition that could be sent against it aside from massed, accurate, long range firepower.  The Commander unit could destroy it easily with its disintegrator, but only a skilled player could micro a Commander close enough without being obliterated in turn.  Krogoths required immense time and resources to produce, and typically necessitated an immediate response by the opposition before the battle was swiftly resolved. The unit model is hard to decipher, but it essentially resembles an evil war god when in battle

Westwood Studios would take a cue from the arcade and console traditions of the previous decade and introduce a “boss battle” in their Firestorm expansion to Tiberian Sun.  The Core Defender was an enormous humanoid mech that towered over every unit and structure in the game.  It activated after players completed the pen-ultimate objective in the final mission; with no warning or foreshadowing given that the Defender would even appear.  Capable of dispatching the strongest units in seconds, the Defender’s only weakness was a lack of air defense, yet its enormous pool of hit points necessitated some very creative tactics that can still be found on various forums and videos today. 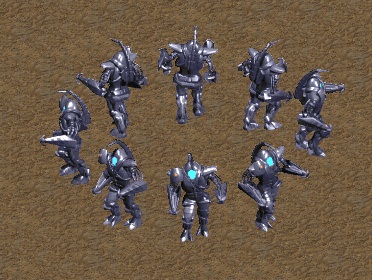 As the development era of the 2000s came into full swing, developers knew that super units were a rare but accepted aspect.  The only challenge was balancing them, if they were available to the player at all.  Ensemble Studio’s Age of Mythology featured several in-game cutscenes were deities and similar beings appeared on the battlefield and wrecked havoc, but it wasn’t until The Titans expansion came out that the enormous Titan units were made available to the player.  Titans were far from invincible as they lacked air defense and the ability to traverse water.  Yet they had the largest hit point pool of any buildable unit by a vast margin, and their attack could level buildings and finish off most units in a couple of hits.  The most impressive feature of the titan was its scale, the enormous model was quite often the largest single object on the map.

After the success of Starcraft, and the publishing of expansions like the Core Contingency or The Titans, two developments became increasingly apparent.  Firstly it was possible to safely provide players with epic units, secondly the standard “heavy” or “high tier” units like Terran Battlecruisers had slowly become just expensive cannon fodder in the faster paced meta of modern RTS games.  Relic Entertainment’s Warhammer 40k franchise, Dawn of War, took this to heart by providing each playable faction in the base game and its expansions with a top tier unit.  Typically these took the form of super heavy armored vehicles or supernatural gods and demons.

Each of them was, by default the last thing unlocked in a battle and required more resources than any other technology or unit.  Additionally, players had to control at least one relic resource on the battlefield in order to even build these epic units, and only one such unit could be built at any time.  Once constructed, these epic monsters and machines typically required an opposing epic unit to stop them, otherwise the battle was often resolved quickly.  Another new development was the uniqueness of each epic unit.  Each had its own quirks and mechanics, and they were not balanced around each other, but around their faction as a whole.  Some were more effective as support weapons, others as frontline units or building destroyers.  For the first time, epic units had transitioned from a class or type to an actual unit tier.

A Bloodthirster of the Chaos Space Marine faction

This topic turned out to be a bit longer than expected, so it’s being broken up into two releases.  Now that we’ve had a chance to see where RTS epic units got their start, next time we’ll see what they turned into as the concept entered mainstream RTS gaming in force.